Over the past 5 years COMUBA has re-evaluated its Social Performance Management Strategy to improve its positioning. This has helped to attract several new international investors.

COMUBA in 2012, with the technical support of MISION Africa, a project that promotes Social Performance Management in Africa, introduced improvements to its approach to Social Performance Management (SPM). In 2014, in order to get a better idea of its SPM structure, post-assistance from MISION Africa, COMUBA underwent an assessment by the Smart Campaign on principles of client protection. It received its first social rating in 2015 from Inclusion [Africa] Ltd, a subsidiary of Inclusion [Social Ratings] SL. These ratings and evaluations have enabled COMUBA to improve its SPM practices. It also allowed its members to have more confidence in the institution, and at the same time substantially reduce the rate of client dropout. In 2016 the institution carried out an evaluation of its Social Performance Management practices using the SPI4 tool, with the technical support of Gilles Da Costa, Regional Manager at Inclusion [Africa]. The results show that COMUBA is on the right track to be certified by the Smart Campaign.

Since 2014 several new international financial partners have been investing in the company. The institution is currently receiving technical and financial support from Grameen Credit Agricole Foundation as part of the “African Facility Initiative”. More negotiations are underway with other potential investors and these should be completed in 2017. The commitment of the institution in SPM, its transparency (presence in the mix market) and the reliability of its data is a big driver behind attracting its existing financial partners. Indeed, once the data is published on the mix market platform it is accessible to many international financial and social partners and demonstrate the strong management and governance of COMUBA. It also gives COMUBA a better stance for negotiating investment conditions, taking into account its own priorities. 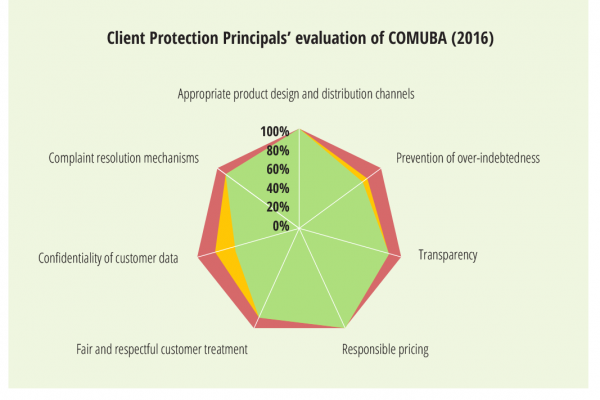